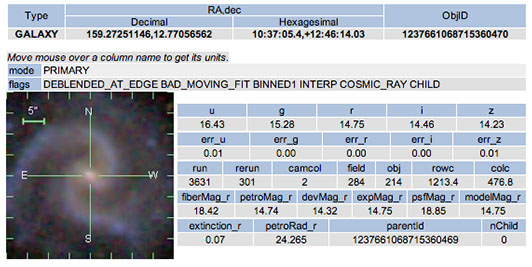 As a whole, the photometric block on the Explore page contains information about the images taken with the SDSS camera. Spectroscopic observations in the SDSS are separate from the imaging.

The first two lines of information in the photometric block of the Explore page contain information related the brightness of the target and the reliability of that measurement.

The SDSS captures images in five different filters (u,g,r,i,z) nearly simultaneously. Based upon the photon counts recorded in each filter, a magnitude is measured. Magnitude is the standard measure for brightness in astronomy and is unitless. The magnitude scale is also reversed, the lower the number recorded for magnitude, the brighter the object. Most objects in the SDSS are relatively dim objects compared with what we are able to see with the unaided eye ( up to 5 or 6 depending upon the sky brightness). Objects targeted for photometry in the SDSS typically range from 12th to24th magnitude.

Below the magnitudes for the target object is a record of the error associated with that measurement. Procedures for calculating error take into account how well the photometry algorithms were able to measure the properties of the background sky and how cleanly the light from the target was able to be separated out from nearby objects. Error less than 0.05 indicates good quality magnitude calculations.

Location of the Original Data

Because there is considerable overlap in the photometric data, it is important to record the exact location of the data that went into a particular image. The same object maybe recorded elsewhere in the database. Whether you are looking at the primary or secondary record of that object or you are interest in veiwing the parent image of a deblended child, the third line of the photometric block records the photometric source that gave rise to the measurements recorded on this page.

Most of the objects in the SDSS are not simple point sources. As a result, different models can be used to measure the magnitude of a more dispersed objects. The model you favor, in any particular case, is based upon what you think the object is. Models for the light distribution over an elliptical galaxy are different from those that work best for blue spirals. The Explore page provides you with all the different model measurements in the r band so that you can compare the differences. The magnitudes listed at the top of this block of information are the model magnitudes which are good, overall measures of object brightness regardless of the source. If you decide, the other magnitudes in all the other bands can be retrieved by constructing a specific query. See SDSS Searches for more details.

The final entry on the photometric block is a record of the results of the deblending process that separates overlapping or neighboring objects’ light. The parentid is the object id for the original image before deblending and photometric measurements were done on the object. When a parent id is presented is nChild should be zero. nChild is the number of objects were separated out from the object featured on the page. For more information see Flags – Deblending and Children.