A spectrum (the plural of which is “spectra”) measures how much light an object gives off at different wavelengths. The spectrum of a star is often displayed as a graph, see Preflight – Spectra for more information about how to read a spectrum.

The spectra of stars and galaxies almost always show a series of peaks and dips called “spectral lines.” As discussed in Preflight – Spectra, these spectral lines  tell us about the type and composition of the object we are observing. Astronomers know what spectral line positions and spacings to expect when looking at an astronomical object (such as a galaxy) because they know what type of object it is, and what the chemical composition is likely to be. However, when galaxies are observed, almost all of them have spectral lines at a longer (redder) wavelength than expected. This effect is called redshift.

These images represent spectral lines on a spectrum (Note: the positions of the lines are to demonstrate the idea, they are not exact). The spectrum that is emitted from a galaxy has spectral lines in known positions, but by the time this light is observed these spectral lines are all shifted, by the same amount, towards the red end of the spectrum.

For example, the Balmer gamma line of Hydrogen emission is emitted at rest at a wavelength (λemitted) of 4340.5 Angstroms.  If you identify this emission line in a galaxy spectrum, and find that it has been shifted to an observed wavelength (λobserved) of 4780 Angstroms, you can simply calculate the redshift:

There are two ways to think about redshift: Doppler shift and Cosmological Redshift. These two effects both lengthen wavelengths that are emitted from an astronomical object, but in two very different ways . 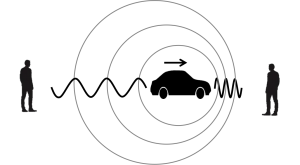 The lengthening of wavelengths due to Doppler shift can be explained in a practical demonstration by using LEGO vehicles to represent a wave of light, the set up for this demonstration is shown below.

The orange board represents the source of the light. The vehicles each represent the peak of a wave of light. The ‘observer’ is at the right end of the table and the source is receding from the observer at a velocity v

Below is a video of this demonstration in action. It should be noted that the measurements given in the video are only approximations. This demonstration uses everyday objects such as LEGO so is not totally accurate.

This series of diagrams shows clearly what is happening in the demonstration video.

Doppler shift can be used to measure the rotational velocity of a galaxy. If one side of a galaxy is redder and the other is bluer, it means that the redder side is moving away from us, and the blue side is moving towards us therefore we know that the direction the galaxy is rotating in. MaNGA (Mapping Nearby Galaxies at APO) uses Doppler shift of galaxies to make velocity maps of galaxies, images of these can be found using Marvin. 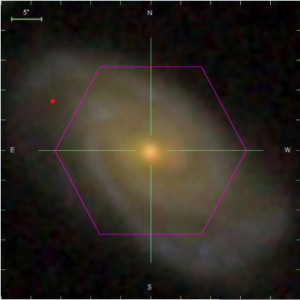 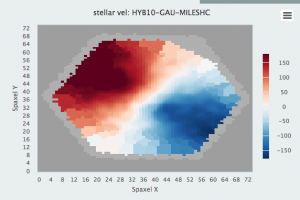 The other effect that can cause wavelengths to be lengthened is cosmological redshift, this is an effect due to the expansion of the universe.

The Universe is expanding isotropically, this means that, on a large enough scale, everything in the universe is moving away from everything else. In 2D, it is analogous to an infinite rubber sheet being stretched, with the galaxies represented by coins glued onto this sheet. As the sheet expands, all of the coins will move away from each other.

The diagram below shows a section of the universe (the grey circle) containing 4 galaxies. The galaxy on the right is drawn as an eye, as it represents the Milky way (the galaxy we are observing from). From left to right, each panel is an arbitrary step forward in time.

Light from the galaxy on the left is traveling to the observer on the right. As the Universe expands, the wave of light lengthens as a consequence. This effect is called cosmological redshift because the light is made redder due to cosmological expansion.

This effect is can be demonstrated in 1D using the same LEGO vehicles as before, but now placed upon a rubber sheet.

In this demonstration the rubber exercise band represents a section of the expanding universe. The 3D, isotropic expansion of the universe has been reduced to an expansion in one dimension in this analogy for simplicity. It should also be noted that in this demonstration you can see the ends of this band, where as in reality the Universe has no edge, no centre and is infinite in size. 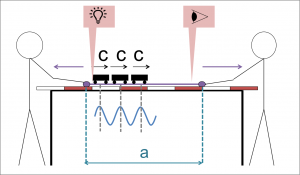 It should be noted that the measurements given in the video are only approximations. This demonstration uses everyday objects such as LEGO so is not totally accurate.

The vehicles represent the peaks of a wave of light, the green band represents a 1D section of the Universe. The source of the light is on the right, the observer is on the left. As the vehicles travel along the band, the band is stretched from both ends, this is analogous to light traveling through the expanding Universe.

The section of the band labeled a(t) in this demonstration represents the relative size of the ‘Universe’ at any given time. Having these lines drawn onto the band help us to track how much the band has expanded by.

As the rubber sheet expands, the spacing between the vehicles increases as a consequence. This is analogous to the expansion of the universe causing the wavelength of light to increase over time.

This demonstration is a useful way to think about how the expansion of the Universe effects the wavelength of light. As well as expanding wavelengths, the expansion of the Universe also gives galaxies a recessional velocity. Recessional velocity is the speed at which a galaxy is moving away from the Milky way due to cosmological expansion. This value is larger for further away galaxies. This relation is explored further in the expedition: Hubble Diagram.