Simply put, the Sloan Digital Sky Survey (SDSS) is the most ambitious astronomical survey ever undertaken. The first generation of the SDSS mapped one quarter of the entire sky in detail, determining the positions and brightnesses of hundreds of millions of celestial objects. It also measured the distances to more than a million galaxies and quasars.

The vast maps produced by the SDSS allow astronomers to address fascinating, fundamental questions about the universe. With the SDSS data astronomers can see the large-scale patterns of galaxies: a web-like pattern of cosmic filaments, clusters and voids. Scientists have many ideas about how the universe evolved, and different patterns of large-scale structure point to different hypotheses. The Sloan Digital Sky Survey data help astronomers to understand which of these hypotheses are right and to form new theories when their observations do not match what is expected.

The SDSS aimed to capture images and spectra of objects in space over a much larger volume of space than ever mapped before. To complete such an ambitious survey in only 6 years required a clever telescope design and a great location.

The SDSS telescope is located at Apache Point Observatory (APO) in Sunspot, New Mexico. The observatory is surrounded by the Lincoln National Forest in the Sacramento Mountains and sits on a mountain 9,200 feet above sea level where the atmosphere contains little water vapor and few pollutants. Because the site is so high and so far from major cities, the night sky seen from APO is among the darkest in the United States.

One of the most important things to know about a telescope is the size of the surface that collects light. Modern research telescopes use large curved mirrors to gather and focus incoming light. The bigger the mirror, the more light that is gathered. The SDSS telescope has a primary mirror that is 2.5 meters across. The more light that is captured, the brighter dim objects will appear and the more detail you will be able to see in larger, brighter objects.

The inside of the telescope is dominated by two reflecting mirrors. Light reflects from the mirrors into a focusing system that includes two corrective lenses that minimize distortion. The diagram above right shows how that incoming starlight strikes the 2.5-meter primary mirror, bounces back to strike the smaller (1.08-meter) secondary mirror, and is then reflected back through a hole in the primary mirror. The light passes through the first correcting lens and then through the second lens on top of the camera. The telescope can take sharply focused images from an area of three degrees, equal to the area of about 30 full moons.

That 2.5 meter telescope also needs to have additional mirrors in place to get the job done. Light from the 2.5 mirror is focused onto a secondary mirror. This mirror directs the light through a hole in the primary mirror. Before reaching the camera, the light is sent through two special lenses that make sure stars on the edges of the image are as sharp as the ones in the middle. 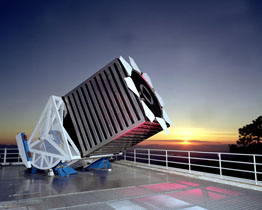 The SDSS telescope’s housing is also unique. Most telescopes are kept inside domes, with only a small slit in the dome for observation. However, this arrangement often causes heat to become trapped inside the dome during the day. When released at night, the escaping heat causes motion in the air that blurs the telescope’s images. To avoid this problem, the SDSS telescope is completely removed from its enclosure and carries its own wind baffle (the metallic box around the telescope tube).

The following video shows an introduction to SDSS and the SDSS telescope: