Whether it is knots of blue stars within a galaxy or optically overlapping objects, the SDSS takes great care to separate targets. Accurate analysis depends upon defining a sort of photon ownership within an image. The process of systematically assigning counts to individual objects within the SDSS is called deblending. The result of this process is consistent photometric measurements. A number of flags exist to inform researchers about the the performance and products of the deblending algorithm. The imaging products that result from deblending are referred to as children.

Closely positioned or overlapping objects are flagged BLENDED. A computer algorithm is then applied to the photometric data that gives credit to each object for its photon contribution. Sometimes isolated galaxies with very diffuse edges are deblended from the sky, itself. If it is successful, the flag DEBLENDED appears in the Flags box.

NOTE: You rarely see this flag in Explore because this tool displays the final processed image by default. The mark PRIMARY in the mode box indicates that this image is marked as the best available, displaying the results obtained after running all appropriate analysis algorithms. Typically this flag is associated with the parent image. Parent images are discussed in the next section.

A number of flags are associated with how the deblending algorithm performed on a particular object. A complete list of flag definitions is located in the PhotoFlags table. Here are a few:

Each object that is separated out as a result of deblending is referred to as a child and flagged CHILD. If a child appears to have more than one photon peak within its outline, it is again flagged BLENDED. Deblending is performed again on the image.

Notice differences in photometry between parents and children.

To search for the image that was processed to produce the photometric results displayed in Explore, use the parentid in the Search by – obj id box. 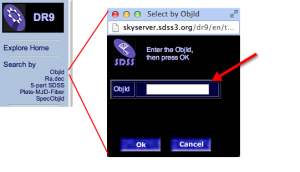