In the SDSS, flags are very important for communicating critical pieces of information.  They inform researchers about the status of the object and act as alerts to possible problems with the image or measurements taken from the image. Each individual flag is separated by a space. For example, Target Primary is two flags, Target and Primary.  Underlines ( _ ) are used to join words within a single flag, for example, OK_ STRIPE.

This page provides an overview of just some of the common flags you will encounter in Explore.  More detailed information about flags can be found at Flag Details  and Schema Browser.

Flags on the Mode Line

The raw data from the SDSS camera and spectrographs are analyzed by specifically-designed computer programs. This process is referred to as the SDSS pipeline.  The pipeline systematically sifts through the raw data to establish a unique database of images and measurements that does not contain overlapping information. The mode line on the Explore page lets you know if you have reached the end of the pipeline, so to speak, and is signified using the PRIMARY flag.

The flag PRIMARY on the mode line is associated with the best image SDSS has available for the selected target.  The FAMILY flag lets you know that you are looking at a slightly different step in the process when the light from this object was not fully separated from nearby objects.  See Flags – Deblending and Children for details. 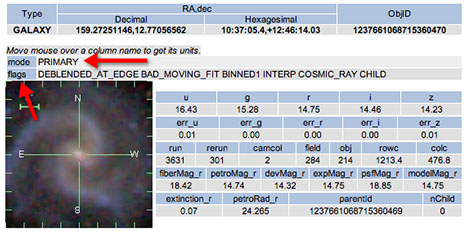 The flags you see in the “flags” line on the Explore page contain alerts related to the quality of the raw data or the image.  These can be informational in nature ( the SDSS version of an FYI) or they can be warnings to be suspicious of the photometric measurements in some way.  Certain flags should cause you to question how well an analysis or algorithm performed.  In general:

INTERP  – alone or in combination this flag lets you know that one or more pixels was inconsistent for some reason and the analysis process reassigned a number to it based upon surrounding values.  In most cases this is no cause for concern; however, PSF_FLUX_INTERP indicates problems defining the response of the instruments in this particular area. It could indicate that photometric measurements should be questioned.

EDGE – is another word you could see alone or as part of a number of different flags.  It lets you know that the object was not in an ideal location in the area or field being analyzed.  Edge warnings show up frequently in galaxy images because of their large size.

BADSKY – alone or in combination with other warning flags, this lets you know that the background light was so complex or poorly recorded that all other measurements should be called into question.

SATURATED – lets you know that some pixels were saturated.  This flag appears even if, for example, a foreground star was successfully deblended or separated from a galaxy.

SATURATED_CENTER – alerts you to saturated pixels at the center of the target.  This is particularly useful when the object is a galaxy. It lets you know it has a very bright core.  You should also be alert for saturated stars that are misclassified as galaxies.

For a complete description of all the available flags, see PhotoFlags.