Asteroids in the SDSS

The Sloan Digital Sky Survey spends most of its time looking at stars, galaxies, and quasars very far from Earth. However, SDSS also sees many things in our own solar system. In addition to the occasional comet or meteor, the database contains 10,000 asteroids! A meteor is streaking across the sky in the SDSS image to the right. Let’s take a look at how these objects are identified in SDSS images.

Most of the objects the SDSS sees are so far away that they do not appear to move. Most stars in the sky move so slowly, you would not notice any significant change over your whole lifetime.

But some objects are much closer to Earth, so they move much more quickly across the night sky. The planets (the word “planet” itself comes from the Greek word for “wanderer”) move across the sky. If you look carefully, you can see the planets change position from night to night.

The planets are the largest, most famous moving sky objects. But when our solar system formed, not all the matter combined to form planets. If a planet tried to form near Jupiter, Jupiter’s enormous gravity would rip it apart. Thus the Solar System has a lot of leftover debris, most of it between the orbits of Mars and Jupiter. Asteroids are actually naturally-occurring space debris.

The first asteroid was discovered in 1801 by Italian astronomer Giuseppe Piazzi. At first, he thought he had discovered a comet. But after he calculated its orbit, he realized that he had found a totally new type of object between Mars and Jupiter.

Asteroids are so close that they move across the sky quickly. The SDSS telescope takes pictures through 5 filters, one after the other. If the asteroid is close enough, it appears to move between filters. You can see a very fast moving asteroid in the picture at the left. The asteroid was moving as the picture was taken in each filter.

Notice how the red and green streaks are close together and the blue streak is farther away. Although the SDSS takes images through five filters, astronomers combine only three to make the color image you see. Color computer images are made by combining red, green, and blue pictures of the same targets. To make SDSS pictures, the light captured with the i-filter is colored red; the light transmitted by the r-filter becomes the green contribution to the picture; and the g-filter makes the blue picture. (Note: The assignment of picture colors to filters is not related to the color of light the filters see.)

Study the picture below which shows a diagram of the SDSS camera. Look at the labels in the upper left corners of the center squares. You can see that the r- and i-filters are close together, but the g-filter is at the other end. Therefore, more time passes between the red and blue images than between the green and red images. The asteroid moves farther in this time. This is why the blue streak is so far from the other streaks in the picture above.

Most asteroids move much more slowly than the one above. Most do not move much as a picture is being taken, and most do not even move significantly between the r-and i-filters. But since the g-filter is at the other end of the camera, the asteroid will move much more by the time the g-filter takes a picture of that area of sky. For such a slow-moving asteroid, you will see what appears to be a yellow dot (the combination of red and green) next to a blue dot!

How to Find Asteroids

Finding asteroids takes practice. Remember that you are looking for a yellow dot and a blue dot close together. The dots should be fairly small and bright. The yellow dot can be reddish-yellow or greenish-yellow, but the blue dot will always be dark blue. Most importantly, the two dots should be close together: no more than a few millimeters (about an eighth of an inch) apart. If two dots are more widely spaced, they are probably two separate stars, not an asteroid.

Can you find the asteroid in these images? 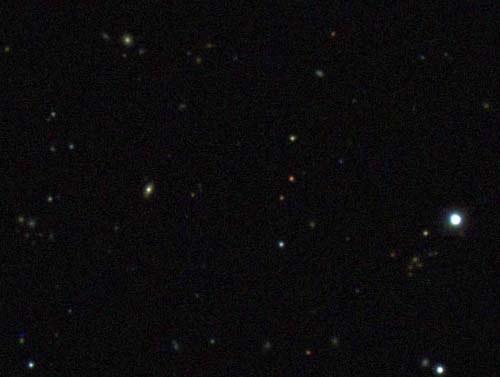 Although we can find asteroids in the SDSS database and images, they are not the intended target of any of the surveys that have taken place to date. It is helpful however, to be able to identify them. In addition, studying the locations and distribution of asteroids can provide clues about how our solar system is constructed.