Once your HR diagram has been shifted to the absolute magnitude scale, you can examine the shape of its main sequence and its turn-off point to approximate its age.

The basic model of stellar evolution begins with the main sequence. When a cluster of stars first forms, the fractional differences in age are significant enough that we can’t assume they’re equal, even though we make that approximation later in their lives. If they were all formed simultaneously, however, they would produce the theoretical “zero-age main sequence” where all of the stars at the time of their birth lie exactly on the main sequence and their HR diagram appears as a unified diagonal stripe.

As time progresses, the brightest and bluest stars will quickly burn through their hydrogen cores and move off the main sequence, fusing the hydrogen shell on their surface to accrue inert helium in their cores. These will remain at about the same brightness, but become very red and thus shift to the right of the HR diagram, resulting in the red giant branch which reaches away from the upper main sequence. As more time passes, stars of lower luminosity will also run out of hydrogen and go through a similar process, so that an older cluster will have a greater fraction of its stars on the giant branch while the dimmer, redder stars remain on the main sequence. Less massive stars can exist on the main sequence for very long times, sometimes orders of magnitude longer than the current age of the universe, because they fuse so slowly. Stars with more mass, on the other hand, evolve relatively quickly into red supergiants or collapse into supernovae. Stars of a middling mass will then start fusing the helium in their cores, increasing in temperature but without a drastic change in brightness. These stars form the horizontal branch, which reaches back toward the left of the HR diagram.

At the very end of a star’s lifetime, once its core is unable to continue fusion, its mass determines its final form. Those with the least mass compress into hot and dense white dwarfs which cluster in the lower-left corner of the HR diagram; more massive stars are pressed into neutron stars and black holes, incredibly dense objects with interesting and unique properties.

An HR diagram of isochrones at three different ages, demonstrating how stars move from the main sequence to the red giant branch as time passes.

For a given cluster, the shape of its HR diagram is influenced by many of the original gas cloud’s properties. Globular clusters are very old, at least two-thirds the age of the universe, which means they formed at a time when heavy elements were very sparse. They also tend to have short main sequences and long red giant branch. Open clusters are much younger, so they formed with higher metal content and have differently-shaped HR diagrams (for astronomical purposes, “heavy elements” or “metals” are typically defined as anything heavier than helium).

As discussed in the previous section of this activity, isochrones are designed to model our understanding of stellar evolution as outlined above. Their shape is likewise determined by the input parameters, so that an isochrone of a given appearance can be directly linked to its initial conditions. Under the assumption that the modelling formula is correct, this allows us to state that a cluster and an isochrone which have the same shape must thereby have the same properties.

This exercise consists of collecting several isochrones which are the same in all respects but one, then overlaying them onto the HR diagram of your cluster to see which one most closely matches. You already know the metallicity of your cluster, since you used it previously to generate a single isochrone. Now you have to return to the isochrone generator you used before, and this time collect several isochrones at various ages:

When you’ve decided on a good range of values to test your cluster against, once again generate the relevant isochrones using the metallicity of your cluster and the SDSS ugriz photometric system. You can collect them individually, if you choose to only test a few ages, but for larger collections of isochrones you can typically make a batch request. 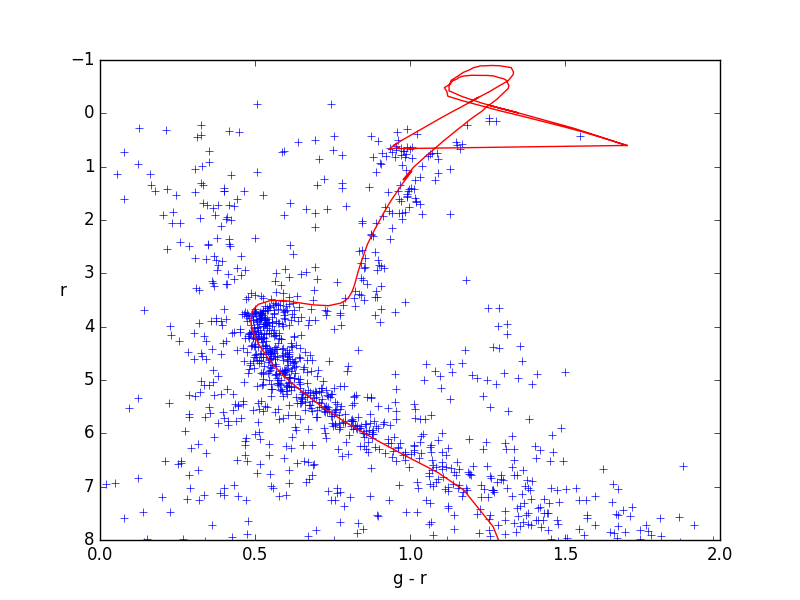 A sample diagram which has been fitted to an isochrone using Python.

Begin by making sure that each isochrone you’ve downloaded has its own text file, or else when you try to plot it, you will get every single one layered on top of the others in an indistinguishable mess. If you were able to download each age and metallicity individually, you can skip this step. If you have a small number of isochrones, it might be fastest to simply separate them by hand, copying and pasting each isochrone into its own numbered file; for larger sets, however, it could be easier and sometimes even faster to write a small program which separates them for you. isosplit.txt is a sample Python 3 script to do this, although it requires a basic understanding of computer directories and use of the Python runtime to access the readline() command.

Once you’ve isolated your isochrones, you can now start plotting them to see which ones best overlap with your cluster’s SDSS data. Begin with your HR diagram from the previous part of this activity, and layer your isochrones on top of it until you find a good match. Make sure your SDSS data and isochrones are plotted on the same axes, using the same filters. Once again, programming will come in handy, since with it you can efficiently plot an entire set of isochrones. If you don’t have the knowledge or time to write such a program, you can also get around this by plotting a few isochrones at a time, starting with the most extreme ages and narrowing in on your cluster incrementally. Keep the following questions in mind while plotting:

Congratulations! You’ve now taken a cluster from the SDSS database and applied various astronomical solutions to learn more about it. For many clusters, you can actually check your estimated distance and age with a quick online search. Knowing how well your results match with other astronomers’ might make it easier to reflect on the experiment and analyze the most significant sources of error. You can then go back to those sources of error and alter your methods to try improving the results. These questions can help guide you through that process: