Understanding Coordinates on the Celestial Sphere

If you want to go someplace in a car, it is handy to have a map or a GPS system to assist you. The same is true when you drive a telescope to a position on the sky. Astronomers refer to this as slewing the telescope, and to do so you need to define the location. Astronomers use a system of numbers to define the location of any object on the dome of the sky. Here’s how it works:

Lines to Guide Us

Imagine a giant light bulb at the center of a transparent Earth that projects the lines of longitude and latitude onto the night sky. You now have a grid on the sky that you can use to define the location of any object.Astronomers give these projected lines unique names. Lines of longitude are now called right ascension (RA) and the lines of latitude are called declination (Dec). Because lines of right ascension appear to cross the sky from east to west in time with the rotation of the earth, they are measured in divisions of hours, minutes, and seconds. There are 24 hours in a day, so there are 24 hours of right ascension on the sphere of the sky. Likewise, each hour is divided into 60 minutes of RA, and each minute is divided still further into 60 seconds. 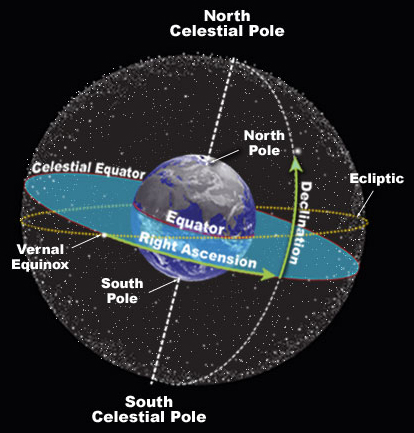 Computers and RA and Dec

The Sloan Digital Sky Survey (SDSS) stores hundreds of pieces of information about more than four million objects in organized collections of tables, the SDSS database. The database is stored and accessed by computers. When programming computers to search and retrieve information, it is not convenient to have one measurement contain multiple units such as we find in traditional RA and Dec measurements. It is for this reason that RA and Dec measurement are reported in the SDSS as decimal degrees. Let’s see how this works.

Converting to Degree Measurements for RA and Dec

Calculating the degree measurements for RA and Dec can be confusing; because Dec formulas are less complicated, however, let’s start with them first.

Right ascension is a bit more complex to understand and complicated to calculate. Remember that we measure right ascension in units of time. This is very handy because lines of right ascension are further apart at the celestial equator than they are at the poles, but the amount of time needed for the sky to rotate overhead from one point to the next is constant. Because we divide circles into 360 degrees and there are 24 hours in a day, we know that 360 / 24 (or 15 degrees) of the sky dome will rotate past an observer in one hour.

Once you understand the relationship between hours and degrees (or time and distance), the rest is almost easy:

The star Alkaid has a right ascension of 13h 47min 32sec. Fifteen degrees of sky pass overhead for each hour of right ascension (15 x n hours = degrees). If 15 degrees of sky pass overhead in one hour and there are 60 min of time in each hour then 60/15 = 4 represents the number of minutes needed for 1 degree to pass overhead. By the same reasoning it takes 240 seconds (3600/15) for each degree to rotate past the observer on the ground. When we put this together the conversion from Hours, Minutes, Seconds to degrees looks like this:

You can see how decimal degrees are simpler numbers to work with when storing information and programming. So remember, whenever you are searching the SDSS database for objects or pointing one of the SkyServer tools to a different part of the sky, the location information will be displayed in decimal degrees.