Gazing up at the sky on a clear moonless night, you can see about two thousand stars. In the 2nd century B.C., Hipparchus, an ancient Greek astronomer, gazed at the sky and saw the same stars. Hipparchus spent years carefully observing the stars, and he became one of the first people to make a map of the sky. Using his map, together with observations made by the ancient Babylonians, he discovered that if you look at the positions of the stars on the first day of spring every year, they will have shifted slightly from the year before. His discovery ranks as one of the greatest discoveries in the history of astronomy. But he could not have made it without his map.

Today, astronomers are on the verge of many other exciting discoveries. They have found objects called quasars, the size of the Solar System but brighter than an entire galaxy, that are the most distant objects in the universe. They have found faint failed stars called brown dwarfs, a missing link in the evolution of stars. And they are constructing a map of the entire universe that might shed light on the universe’s origins fifteen billion years ago. But like Hipparchus, modern astronomers cannot continue to make these discoveries without an accurate map. Over the next few years, the Sloan Digital Sky Survey will make the most detailed map in the history of astronomy, a map that astronomers will use for decades to come.

The History of Sky Surveys 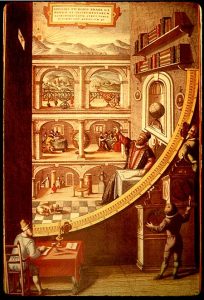 Sky surveys have had a long history, and have led to some of the most important discoveries in astronomy. The next major systematic sky survey was not begun until 1700 years after Hipparchus. Tycho Brahe, a 16th Century Danish nobleman, studied the motions of the planets from an observatory on his property. Brahe and his assistants made naked eye observations with the help of a large sextant, a tool that sailors used to find stars. Brahe’s survey took decades, and was more precise than any survey before. After Brahe died, data from his survey was passed on to his assistant, Johannes Kepler. Using Brahe’s data, Kepler deduced that all the planets travel around the Sun in elliptical orbits – forever laying to rest the idea that the Earth was at the center of the universe – and derived his famous three laws of planetary motion. Kepler’s work, based entirely on Brahe’s map, stands as one of science’s crowning intellectual achievements.

For three hundred years after Kepler’s time, astronomers thought the universe consisted of only the stars in our the Milky Way, along with a handful of faint, fuzzy, and mysterious objects they called “nebulae.” Most astronomers believed these objects were interspersed among the stars. Later, it was found that most of these objects were actually independent galaxies lying hundreds of millions of light-years from Earth. Early telescopes were unable to resolve the individual stars in these distant galaxies, so they appeared only as small nebulous smudges on the sky. Our Milky Way Galaxy is similar in many
ways to this galaxy image, seen by SDSS.

In 1917, a new telescope was built on Mount Wilson in California. The Mount Wilson telescope was the largest ever built in the world, and it unveiled an entirely new picture of our place in the universe. Using that telescope, which was then considered gigantic, astronomers discovered that many of the nebulae were other galaxies like our own Milky Way. Further maps showed that the universe contained hundreds of billions of galaxies. Less than a decade after this surprising discovery, astronomers found another, even bigger surprise: not only is the universe made up of billions of other galaxies, it is also expanding and changing over time.

In two thousand years of astronomy, no one ever guessed that the universe might be expanding. To ancient Greek astronomers and philosophers, the universe was seen as the embodiment of perfection. The heavens were truly heavenly – unchanging, permanent, and geometrically perfect. In the early 1600s, Isaac Newton developed his law of gravity, showing that motion in the heavens could be explained using the same laws as motion on Earth.

However, Newton ran into trouble when he tried to apply his theory of gravity to the entire universe. Since gravity is always attractive, his law predicted that all the matter in the universe should eventually clump into one big ball. Newton knew this was not the case, and assumed that the universe had to be static, so he conjectured that the Creator placed the stars such that they were “at immense distances from one another.” Albert Einstein’s Theory of
Relativity is the basis for
our cosmological models of
space and time.

In 1916, Albert Einstein ran into the same problem that Newton did. Einstein had just completed his General Theory of Relativity, which explained gravity in a different way from Newton’s law. Like Newton’s theory, General Relativity predicted that the universe should be collapsing into a ball. Because Einstein assumed that the universe must be static, he added a constant term to his equations that counteracted gravity on very large distance scales. A few years later, someone pointed out that Einstein’s equations had another solution in which the universe should be expanding, but Einstein continued to work with his constant term, believing the universe to be static.

Then, in 1924, Edwin Hubble of the Carnegie Observatories made a new map. He used a new telescope on California’s Mount Wilson to observe a series of distant galaxies, and found that light from those galaxies was redshifted – that is, light waves were stretched out like sound waves from a passing siren. The further away the galaxy, Hubble found, the greater the redshift. Hubble’s observation showed that the universe was expanding, meaning it had started at a single point called the big bang about fifteen billion years ago. When Einstein heard about Hubble’s discovery, he realized that his equations predicted the expanding universe all along, and called his constant term his “biggest blunder.” Today, the idea of the expanding universe is the basis for all of modern astronomy.

Mapping the Sky – What does it mean?

Since Hubble’s time, a few more sky surveys have been conducted. But most astronomy research focused on observing a small number of individual objects, often chosen because they appeared somehow unusual. By choosing unusual objects, astronomers were attempting to observe and categorize a broad range of celestial phenomena to discover and constrain the limits of “what’s out there.” But some astronomers using this research method found that calculations they thought were simple and straightforward were actually difficult. For example, they found that it was particularly hard to determine the expansion rate of the universe (called the Hubble constant), the density of the universe, how galaxies cluster together, and even what makes up most of the matter in the universe. The reasons for these difficulties are clear: astronomers had too little data to work with. It was as if they had been trying to study the oceans, but seeing only a small patch of the North Atlantic. Astronomers realized that it was time for another map of the entire sky, one that could see large portions of sky to distances up to several billion light-years. Now that technology has become advanced enough, this map is being created by the Sloan Digital Sky Survey.

What do we mean when we say the SDSS will map the universe? To the SDSS, mapping means measuring the positions and properties of all the hundreds of millions of celestial objects its telescope can adequately observe: over one-quarter of the northern sky. To find these objects, SDSS’s astronomers must first use their telescopes to take a picture of the sky over the whole survey area. From this first set of observations, almost all objects can be categorized into well-recognized types such as stars, galaxies, and quasars. This survey also measures the objects’ positions very precisely. The survey is, in some sense, already a map of the sky: it tells astronomers where to look to find any of the objects. But astronomers are also interested in measuring the distances to these objects, to get a full three-dimensional picture of “what’s out there.”

Measuring distance is of especially great interest to cosmologists, who study the origin and structure of the universe. To find distances to celestial objects, the SDSS’s astronomers must go back to each detected galaxy and observe it once again with an instrument called a spectrograph – basically a giant prism that separates light into its component colors. The spectrograph analyzes how much of each color of light comes from the object. Since the universe is expanding, the wavelength of all the light coming from the galaxy has been stretched as it has traveled. This stretching is called the redshift of light. By measuring the redshift of each galaxy, astronomers can determine the distance to the galaxy and make a full three-dimensional map of the positions of galaxies. The advanced technology of the Sloan Digital Sky Survey is able to measure the distances to about 600 galaxies in less than an hour. In five years, the survey will measure the distance to over a million galaxies.

A spectrum of a galaxy, which shows how much light the galaxy gives off at different colors. This spectrum is stretched, or redshifted, relative to what it would be on Earth. The number “z” at the bottom of the image shows the degree of redshift.

From the belief that the Earth was the center of the universe to the understanding that our Sun is just one of hundreds of billions of stars that make up our own Milky Way, human knowledge traveled quite a journey between antiquity and the Renaissance. And like the great earthly explorers of the Renaissance, astronomers at the turn of the last century ventured further out than ever before, and found the universe a far larger place than anyone had previously imagined. Twentieth century astronomers discovered black holes lurking in the centers of galaxies, stars with the mass of a mountain compressed to the size of a sugar cube, colliding galaxies, exploding stars, and quasars – giant shining beacons of light with the output of over 1000 Milky Ways.

And as the early European explorers were soon followed by botanists, geographers, geologists, and surveyors who thoroughly and systematically explored the “New World,” astronomers today are following the lead of the astronomical explorers of the last century, embarking on their own thorough and systematic exploration of the heavens.

The universe, however, does not give up its secrets easily. The Sloan Digital Sky Survey has come together through the hard work of astronomers around the world. Astronomers will use data from the SDSS to discover many more amazing things in the years to come.