Elizabeth Ramseyer teaches physics and astronomy to juniors and seniors at Niles West High School in Skokie, Ill, where she has taught for 23 years. The student body is very diverse. “If you could imagine all the different walks of life that are in The United States,” Ramseyer said, “we have them at our school.We’re up to 92 languages spoken at home.”

Ramseyer developed the post-physics astronomy class with now-retired colleague Rich DeCoster in 1997. “Form any schools that have an astronomy class, it’s a semester-long class and they just hit the highlights of the concepts; they don’t really get into the math,”Ramseyer said. “We go more into all of it. We don’t cover planets very much; we spend most of our time developing how we know what a star is doing what—what is it’s life—and then we move on to relativity and cosmology. It’s a year-long class, and you have to have successfully completed physics to be in the class—those are all seniors.” 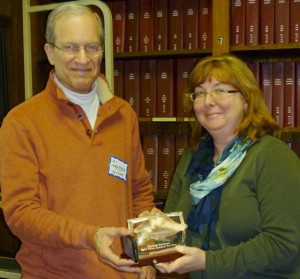 Kate Meredith did re-writes of the hands-on Voyages teaching labs, and Ramseyer used Voyages in the astronomy classes at Niles West High School, and at a camp in the summer at the University of Chicago. (The summer sessions were in a class called “The Physics of Stars,” as part of the Graham School program,which provides college credit classes to high school students.) Ramseyer beta-tested the Voyages teaching labs–which use data from the Slone Digital Sky Survey(SDSS)–with her students. “I’ve used the Spectra and the Color labs,” Ramseyer said. “I really liked the re-write on the Color [lab]. It’s much more accessible than the previous version, and I like that it’s open-ended. It’s short and to-the-point—it’s got many layers. Students can follow it very easily and get the gist of what’s going on. I also like that there’s the ability for students to figure it out on their own because she [Kate] included videos. I really liked how it was open-ended, so students could actually work on are search project or add to what was considered in that unit.”

The Color and Spectra labs were used to determine what was going on inside of stars, as well as where the stars were in their life cycle. “If we know the color and can figure out the luminosity, we really can tell a lot about a star,” Ramseyer said. “We can tell its story; we know where it started in its life and we know where it’s going to end.”

Ramseyer said one of the advantages of using the Voyages labs was that it gave the students the opportunity to work at their own pace. “That’s the best way to learn so you can really master the topic,” she said. Having many students learning at different speeds, however, is a challenge for all educators. “If you’re under a deadline in classes, that’s always the double-edged sword in teaching.”

Ramseyer said equipment-wise, there aren’t any challenges with the Voyages lessons. “Even a teacher who hasn’t covered—or knows as much—about astronomy can do this lesson on their own and really be up-to-speed pretty quickly, which is great.”

Kate Meredith served as the point-of-contact, and Ramseyer said that if she ever had questions, she could always go to Kate and would get a very prompt response. ”Even if I was in the middle of teaching a class, I could always email Kate with questions and by the end of the class, I’d have a response,” she said.

Ramseyer said she’s looking forward to the future development of the Hertzsprung-Russell Diagram lab. “I know they’re also working on Cosmology, and that area has really come to the forefront in astronomy over the years, so I’m glad we have data that we can actually analyze from that,” she said. “If they’re ready to go, I’m going to be using that in spring for sure with my students.”

Ramseyer was the 2013 Yerkes Observatory Educator of the Year for her work ten years ago with the Astronomy Resources Connecting Schools (ARCS)project, which was an Illinois Board of Education grant providing funding to schools for the purchase of equipment to use in their communities. “A gentleman in my community named John Slater donated the observatory that my school now has in order to house the equipment,” Ramseyer said. (Niles West High School was able to purchase a 10-inch telescope using the ARCS grant money.)

“I think we’re lucky that we put this class together in 1997, because without the class we wouldn’t have students who are interested in astronomy,which wouldn’t have caused me to apply for this grant, and then we wouldn’t have had the equipment or the observatory,” Ramseyer said. “Every year, I have my students do a star party for the community. We’re just very passionate about astronomy in my district.”

Elizabeth Ramseyer teaches physics and astronomy to juniors and seniors at Niles[...]

For Oliver Fraser, a lecturer at the University of Washington, teaching astronom[...]